In my last post I outlined a way to manage native object lifecycle from C# in Unity. But I skipped one of the conveniences of calling native functions. You can call a function without matching the declared type of the pointer parameters. That means you don’t need to use CFTypeRef everywhere.

The pointer you have in C# is untyped, it is void *. That’s the same as CFTypeRef. But you can declare and call native functions which are your type. Let’s take a look at one of the classes we could build from the last post.

This is a very basic native class which has its lifecycle controlled from C#. But we can take things a step further with our own functions. Let’s add a method to our objective-c interface.

Now we can add an implementation, and provide a C function wrapper. Remember, C# can call C functions, but not objective-c. So we need to write a simple C wrapper for any methods we want to call from C#.

Notice the declared pointer type in the function parameters. It is NativeClass * instead of CFTypeRef which was used last time. Yes, this actually works. Finally, let’s add the C# code for this method.

In C#, the pointer remains an IntPtr which is essentially a void * or CFTypeRef. But we can call functions with the proper type declared in the function parameters. That means no casting is needed when we marshal our pointer into native objective-c.

After my last post I really wanted to explore AppleScript some more. So that’s what I did.

One thing I like to do is listen to podcast episodes in chronological order. That is to say episodes from different podcasts. But also one episode at a time. The podcasts I subscribe to average about 50 minutes per episode. I use these as a measure of time while working. When an episode finishes I know it is time to take a quick break, get up, walk around for a minute it two. I don’t want the default iTunes behavior of going straight into the next episode and have to pause it when I get up. Some people might say that there is a particular program which can already do this easily. I didn’t really feel like getting a new program to do it since I was already managing them in iTunes. And I wanted something to do in AppleScript. It seemed like a good candidate.

I wrote this script for iTunes 10. There are problems with it in iTunes 11 because iTunes appears to sometimes discard “played” state of individual episodes. Anyway, here it is.

My first post about AppleScript didn’t describe what the code does. Let’s do better with this post. People with little to no programming experience should still be able to understand it.

The first line, tell application "iTunes", means to use the iTunes dictionary for subsequent lines. An AppleScript dictionary contains information about commands and types specific to a particular application.

The third line, set allUnplayedPodcastEpisodes to tracks in podcastsPlaylist whose unplayed is true, similarly takes care of many details for you. The expression tracks in podcastsPlaylist whose unplayed is true finds and returns all unplayed episodes in the variable podcastsPlaylist. (This is actually where the script trips up. iTunes appears to not save the unplayed value properly, and podcast episodes which I previously played appear unplayed.) The resulting list of that expression is then set to the variable allUnplayedPodcastEpisodes.

The next line, if (length of allUnplayedPodcastEpisodes) is 1 then, is an optimization. Most of the work of the script is in searching for the oldest episode. When there is only one unplayed episode it is automatically the oldest. This line checks for that condition. When there is only one episode, the next line, play first item in allUnplayedPodcastEpisodes, executes. The variable allUnplayedPodcastEpisodes is a list, meaning there are multiple elements. List elements are normally accessed by index with index 0 being the first element, index 1 being the second, and so on. AppleScript has some shortcuts, one of which is accessing the first element. The line sends the play command with that first element. The play command accepts a media object for iTunes to begin playing. The iTunes dictionary defines it, so it only works after a tell application "iTunes" command.

The next line, else if (length of allUnplayedPodcastEpisodes) is greater than 1 then, checks to make sure there are podcast episodes. If there aren’t any episodes there is no point to running any more code because in the end it wouldn’t do anything. The condition checks for more than one because it is clearer under what conditions the following code runs.

Now we’ve come to the interesting part. This is where we search for the oldest episode. Since the date of the oldest episode is unknown we must check every episode looking for the earliest date. A basic linear search is good for this. It goes through the list comparing each episode to the oldest known episode.

The line set oldestPodcastEpisode to first item in allUnplayedPodcastEpisodes starts the algorithm. When first starting there is no “oldest episode” so one needs picked. We use the first element in the list because it is easy to access.

Once all elements of allUnplayedPodcastEpisodes have been examined, the script has saved the oldest episode in the oldestPodcastEpisode variable. At that point, we tell iTunes to play it by sending the play command.

That’s all. I covered a lot of the basics of AppleScript. Feel free to ask any questions in the comments. 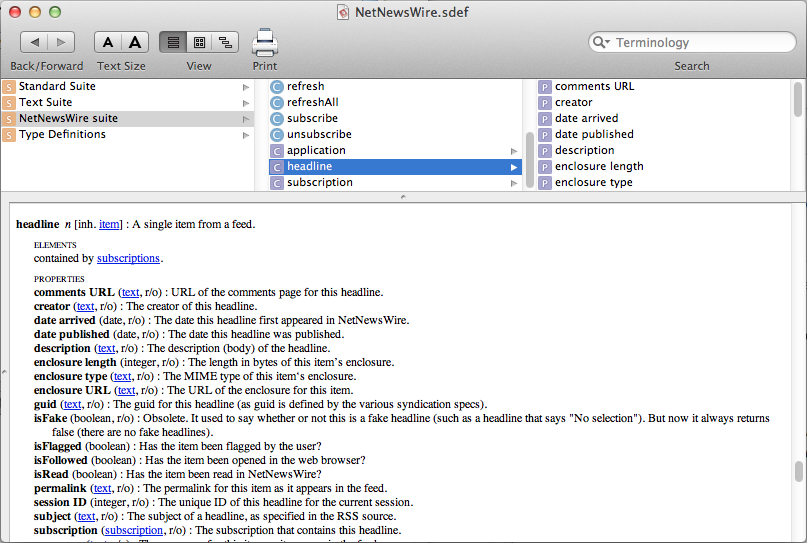 In my last post I described the experience and development of my first true attempt at SVG. This post will describe the javascript code which implements the behavior of that color picker. This is meant to describe the code to somebody who understands basic programming but not necessarily javascript or working with graphics. If you have a solid grasp on javascript and programming GUIs you can skip this post.

All code is viewable in the source of the page.

First let’s cover the “global” variables. The first, HEX, is used as a constant in the conversion from decimal to hexadecimal (more on that soon). The colorData variable is used to store the state of the color data and is directly modified and displayed by the sliders. The min and max variables are treated more like constants as they represent the minimum and maximum pixel locations of the sliders. The selected variable points to the currently selected slider, or null if none are selected. To be selected means the user is currently modifying that slider. Finally, button points to the button currently in use by the user, or null if none are in use.

Now for the functions. The code covered in this post does not include application logic. These functions facilitate communication between the graphical state and the data and most are event handlers. Most of them are fairly straightforward.

The first function is mouseCoords. This function is pretty straightforward. It takes any mouse event fired by the browser, extracts the coordinates of the event, and returns a single object containing the x and y coordinates.

The update function updates the graphical state to reflect any changes to the data. It should be called anytime the state changes.

The drag function is deprecated and no longer works. However, you will notice it is still being called by some SVG elements. This was used early in development but never removed when replacements were developed. In a non-educational, shipping product any code referring to it should be removed. The reason it is still in the source is because it was handed in that way and this is meant to be an archive of what was graded.

The selectHandle function is the event handler for when a user clicks in one of the handles of a slider. It sets the global for the currently selected handle. The unselect function sets the state of all objects to not selected. It is similar to a “select none” action in most applications. It affects all sliders and buttons.

The buttonOver, buttonDown, buttonOut, and buttonUp functions are all event handlers working in conjunction with makeButtonDown and makeButtonUp to control the graphical state of the buttons. When the user mouse-downs on a button the global button is set to point to that button and the grical state of it changes. The user can then mouse-out and mouse-over the button with only the state of that button changing. If the user then mouse-ups anywhere outside of the button no action is performed and the global is set to null. This functionality is similar to native buttons on most platforms. If the user mouse-downs on a button and proceeds to mouse-up over the same button, it is considered a click. the click is reflected by changing the color data withing the boundaries of each attribute followed by the graphical update.

The next post (Part 2) will cover the application logic and associated code.